As they say, out with the old and in with the new. But every now and again, ‘new’ is a total reinvention. Here is one of America's most iconic sports cars, reimagined, reinvented & restyled. Just some of the differences from its predecessor, the C7, include its alloy wheels, air intakes, and other styling cues.

But let’s forget about its predecessor for a moment. Historically, Corvettes have always been front-engined cars. And you may have heard the news about where the hotly anticipated Corvette C8’s engine sits within its chassis, due to excitement surrounding this particular aspect of the car.

After more than 60 years of production and seven design generations, General Motors finally decided to change the Corvette to a mid-engined platform for the first time in its long history. But if you think that this is a new idea, think again. The concept of a mid-engined Corvette stretches back decades. Concept cars such as the 1959 CERV-I, the 1964 CERV-II and the 1968 Chevrolet Astro II were all marked to be mid-engined cars, but never made it into production. 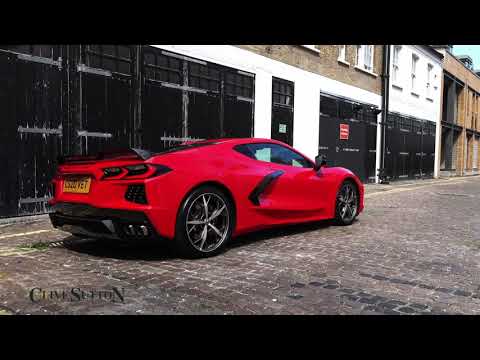 What is the Corvette C8?

The 2020 Corvette C8 is the first production Corvette to sport a rear to mid-engine layout. It harnesses an all-new 6.2-litre V8 engine called the LT2, placing it alongside other mid-engined rivals such as the Audi R8 and the Acura NSX, with the meaner competitors being the Ferrari F8 Tributo or McLaren 720S.​​

The engine produces a whopping 490 horsepower which is sent directly to its rear wheels, blasting it ahead from 0-60mph in less than 3 seconds! The entry-level model alone claims to have a top speed of 194 mph. That’s significantly more than other cars of a similar price, making it in a league of its own.

It is also meant to be the most premium Corvette that Chevrolet has ever built, with sportiness more intact than ever. The cabin of the C8 has a more luxurious ambience and driver-centric design than the previous model year and the exterior is designed to flow through the air like a jet fighter.​​

As stated by Chevrolet…

“This all-new mid-engine sports car is so much more than Next Generation – it’s next level. At once precise and powerful, the Corvette Stingray Coupe and Convertible have been completely redesigned from the ground up to deliver a thrill on every drive.”

How much is the Corvette C8?

The vehicle is offered at a very reasonable price, given that it is a mid-engine sports car that makes nearly 500 horsepower. Chevy offer an exhaustive array of options to choose from, which of course will inflate its price.

2LT Includes everything in 1LT, plus:

3LT Includes everything in 2LT, plus:

Let's get one thing out of the way, the 2020 Chevrolet Corvette is good, really good. The radical new 2020 car looks and drives like a supercar and is in all honesty, a performance bargain. It raises the bar to new heights and redefines a classic to create what is a faster, more sophisticated American automobile. And guess what – it is coming to the UK in right-hand-drive in both Coupe and Convertible form.

The Chevrolet Corvette C8 Stingray is available for sale at Clive Sutton Cars. Limited slots are available! Register your interest below:

Company Info
Back to Top

Required cookies are essential to let you move around the website and use its features, such as accessing secure areas, shopping baskets and online billing. These cookies allow our website to provide services at your request.

Functionality cookies are used to remember the choices you make, e.g. your user name, log in details and language preferences. They also remember any customisations you make to the website to give you enhanced, more personal features.

Targeting cookies collect information about your browsing habits to deliver adverts which are more relevant to you and your interests. They also measure the effectiveness of advertising campaigns.

This site uses cookies and related technologies for site operation, analytics and third party advertising purposes as described in our Privacy and Data Processing Policy. You may choose to consent to our use of these technologies, or further manage your preferences. To opt-out of sharing with third parties information related to these technologies, select "Manage Settings" or submit a Do Not Sell My Personal Information request.