Required cookies are essential to let you move around the website and use its features, such as accessing secure areas, shopping baskets and online billing. These cookies allow our website to provide services at your request.

Functionality cookies are used to remember the choices you make, e.g. your user name, log in details and language preferences. They also remember any customisations you make to the website to give you enhanced, more personal features.

Targeting cookies collect information about your browsing habits to deliver adverts which are more relevant to you and your interests. They also measure the effectiveness of advertising campaigns.

This site uses cookies and related technologies for site operation, analytics and third party advertising purposes as described in our Privacy and Data Processing Policy. You may choose to consent to our use of these technologies, or further manage your preferences. To opt-out of sharing with third parties information related to these technologies, select "Manage Settings" or submit a Do Not Sell My Personal Information request. 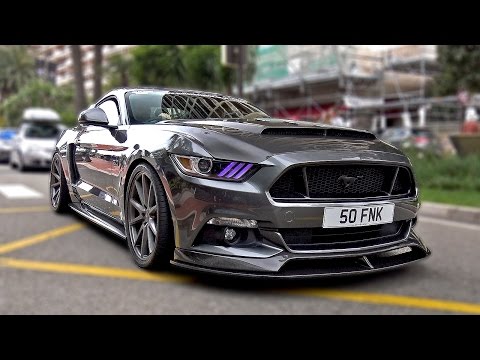 We were happy to participate once again in this year’s Top Marques show in Monaco. This “boutique motor show” hosts a variety of unique vehicles and, for certain exhibitors, the chance to demonstrate vehicles on part of the Grand Prix circuit.

This was an ideal opportunity for us to reveal our latest model Sutton CS800 Mustang to the public. We have been working hard to produce the CS800 Mustang, and Top Marques Monaco was the perfect place to reveal it.

On the first day of Top Marques Monaco, we received a great deal of attention for the CS800 Mustang since the press release was published few days before the event. The Top Marques Monaco was solid proof of the CS800 Mustang’s success. Both visitors and the press were excited to see our in-house developed 800HP engine driving the iconic Ford Mustang. The other proud moment for us was the visit of the Monaco Royal family and their choice of the CS800 Mustang for a test drive on the streets of Monaco. With this test drive, the CS800 was given the royal seal of approval by the Monaco Royal family!

In the days that followed, the momentum of attention increased more than we could have imagined. During the second day, we had a very special guest. The Make a Wish Foundation asked us to give a test drive to a special child in the CS800.

Thanks to the Top Marques Monaco organisers, we were granted special permission to offer test drives to visitors and potential clients on the Monaco GP circuit. We had more than 80 test drives during the whole event.

The other exciting moment of the Top Marques Monaco was the presence of the Ford F150 Raptor with the satin paint finish. No one can ignore the iconic Ford F150. Every 98 seconds a brand-new Ford F150 is sold around the world, and the Raptor is the king of the F150 family. The satin finish and the powerful 3.5-lt V6 engine with 450 HP captured the attention of the visitors. Moreover, we received orders from the Ukraine, Italy and France.

We also brought our CS500 Mustang Convertible to the show. Still with nearly 450hp, our more “leisurely muscle car“ was delivered at the end of the show to its new owner in Monaco.

Among the American cars on our stand, a British guest was the Bentley Continental GT. Bentley offers an exquisite attention to detail, and bring with it the heritage of British motoring. The exquisite three tone paint job of the Bentley, together with the two tone leather interior impressed all the visitors.

Company Info
Back to Top